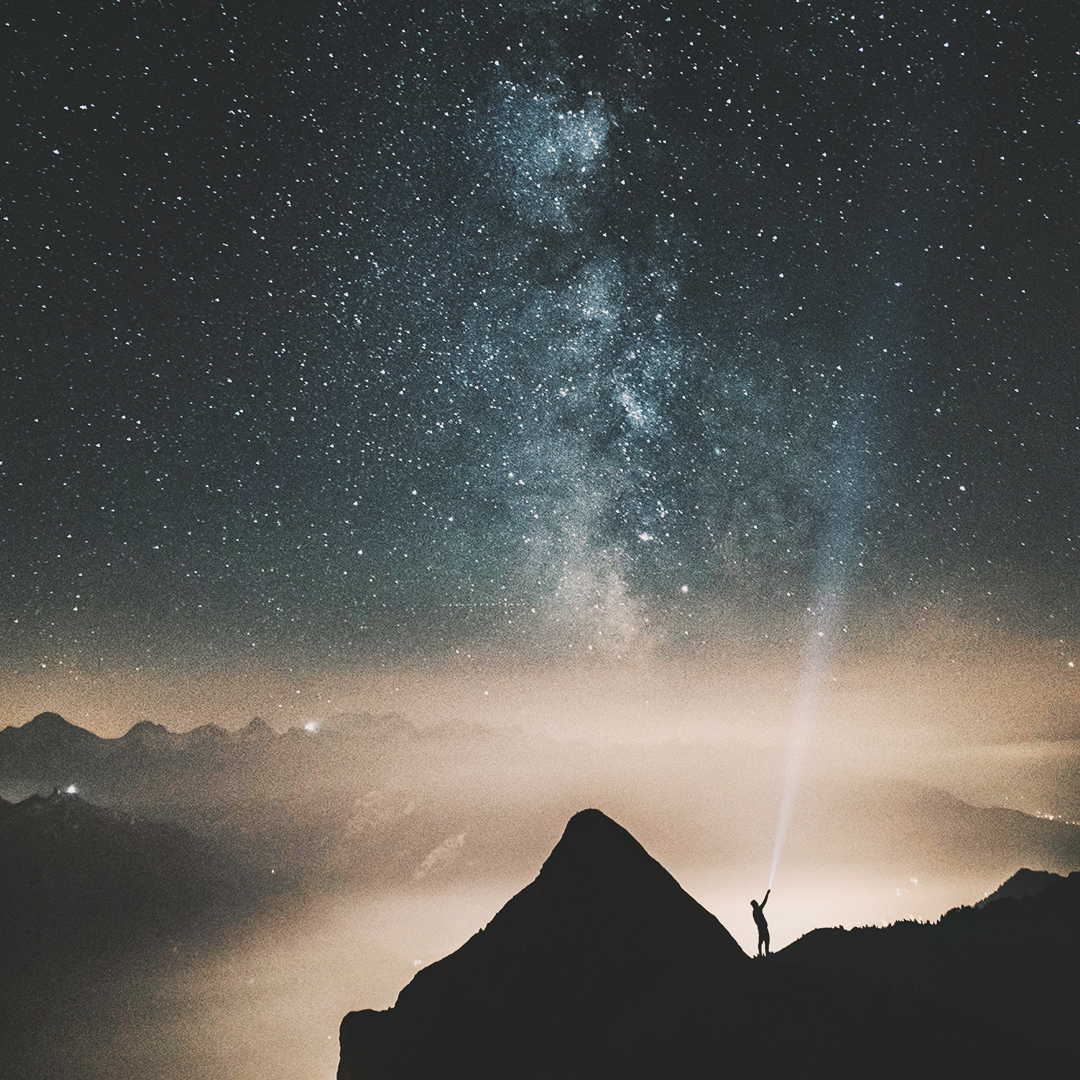 Abraham had no son, and as far as he knew, he could not have one, naturally speaking, yet God spoke in the past tense to him as if it was already done — and in God’s mind, it was !!

When God speaks to us through His Word, His promises and His statements are not necessarily understandable at first by our intellect. While these things are not comprehended by our human mind, they are by the spirit.

God says many wonderful things about Abraham in Romans the fourth chapter — things that are inconceivable to our natural intellects. For instance, Abraham was no great general, nor was he a king in the ordinary sense. At any one time, he only had a very small number of servants — perhaps the largest number he ever had was about 300. Though this was a very large household, it certainly was not anything like a nation. Yet God tells us he had made him the father of many nations.

God was so intimate with Abraham, He called him His friend. Because Abraham believed and trusted God, it was accounted to him for righteousness, and his belief illustrates the principle of the “Bold Confession” of God’s Word. He believed in his spirit, confessed with this mouth the things God told him, and then acted in faith upon God’s promise.

Abraham didn’t try to argue like this with God. The Bible says, that he “believed God”, “Before Him whom he believed, even God, Who quickens the dead, and calls those things which be not as though they were.”

“Quickens” means “bring to life the dead.” Notice what follows, God calls those things which don’t exist as though they did. No man can see them, feel them, or hear them — none of his senses can detect that they are there — yet to God, they are there !!

Our heavenly Father wants you and me to see things in this way through His eyes, and to trust and to believe Him even as Abraham did. When He reveals some truth to us. He wants us to be like little children and say, “Thank You, Father. I may not understand what you are telling, me, but I believe it and I know that it is true.”

It was not enough for Abraham to simply believe God, for that was in his spirit only. The Bible tells us, “Who against hope believed in hope, that he might become the father of many nations, according to that which was spoken, So shall your seed be.”

Every human hope was gone, yet Abraham believed there would be the physical manifestation of what God said was already true. He knew that he would become “the father of many nations,” because God said so.

“Being not weak in faith, he considered not his own body now dead.” Abraham paid no attention to human circumstances after he heard from God. When God said, ” I have done this,” Abraham could have questioned this statement.

He might have said, “Well, I don’t see any child — there is not even a possibility of one. My body is dead, and Sarah’s womb is barren, and it is impossible for her to have a child.”

Instead, the Bible tells us of Abraham’s bold confession of faith. We read that “He was not weak in faith, and he staggered not at the promises of God through unbelief, but was strong in faith, giving glory to God”. Here is the confession of Abraham’s mouth. He literally praised the Lord that that which God said was so, being fully persuaded that what God had promised He was able also to perform.

Here was a man who believed something in his heart, confessed it with his mouth, and then acted upon it. About a year after God gave him this promise, he still had no child. If he had relied on his feelings, his emotions or his circumstances, he would have been confused. If he had listened to the testimony of his friends, or to the reasoning of his own intellect, he would never have had that strong, unstaggering faith. God’s way of fulfilling His promise to Abraham differed from everything he had been trained to believe concerning the basic facts of life.

So one year went by, two years, and finally, fifteen years passed. Even after eighteen years, seemingly nothing changed. Every now and then Abraham would go outside of his tent, and one night God said to him, “Look at the stars in the sky, Abraham. Can you count them?” Abraham replied, “No, Lord, they are too many for me.” Another time God said to him, “Look at the sand in the sea, Abraham. Can you count it? So shall your seed be.”

So in spite of the way things looked, Abraham continued to believe God and continued to be strong in faith. Abraham’s faith was sustained through God’s Word those eighteen to twenty years until finally, God placed Isaac, the promised child, in his arms.

The Purpose of Testing

Now when his son Isaac was only a young lad, God called Abraham, and we read that He tempted him. That word “tempt” means “test.” Oftentimes a Christian will say, “God tested me because He wanted to know what I would do.”

God already knows what you are going to do without testing you. The purpose of testing is so that you will know what you will do in that kind of situation. You do not really know what level of faith you have attained until it has been tested. Therefore, God allows these pressures to come against you so you can exert your faith against them.

Abraham needed to know about himself, so this is why God came to him and said, “Abraham, take now your son, your only son Isaac, whom you love, and get you into the land of Moriah and offer him there for a burnt offering upon one of the mountains which I will tell you of.”

When I first read this passage and preached about it, I spoke of Abraham as a man bowed down with age, whose eyes were red from weeping all night. This was one of those “but we know” sermons, that I told you about before.(1) Later, when I read the Bible with an open heart, I discovered that was not the way it was at all.

The Bible tells us that, “Abraham rose up early in the morning, saddled his ass, and took two of his young men with him.” As an Oriental potentate, though only a ruler over his own household, one thing he certainly would not ordinarily do would be to saddle his own animal and cut his own wood. So here was this man of great power and influence, who demonstrated his faith and acted accordingly.

An Unchangeable Promise and a Bold Confession

Abraham knew that God had promised him that out of Isaac would come kings, priests, rulers, nations and people. He believed God and knew that God could never change and that nothing God would tell him afterwards could alter or modify His original promise.

So Abraham remained faithful in believing God and took two of his young men and Isaac with him, and went to the place which God had designated. When Abraham saw the place afar off he said to the young men, “Abide you here with the ass. I and the lad will go yonder and worship and come again to you.” Here was a glorious bold confession beforehand of that which Abraham believed deep in his spirit.

He knew that God had given him this son and that God had said he would be the blessed seed, and that from Isaac would come rulers and kings and nations and people — not from other sons, but from this son of promise.

Therefore, Abraham was sure that even if Isaac were to die, God would raise him from the dead. The Bible refers to this in Hebrews 11:19 “From whence also he received him in a figure.”

Abraham was completely confident and trusted God, so he testified they would return before he saw any possibility of it. He knew that what God said could not fail.

When they reached the place God designated for the sacrifice to be given, Isaac asked, “Where is the offering?”

“God will provide us with an offering, my son,” was Abraham’s reply.
Isaac trusted his father completely, and when he answered this way, Isaac didn’t ask a lot of questions, even when Abraham bound him to the altar.

As Abraham raised his knife above Isaac, the angel of God appeared and said, “Abraham, do your son no harm.” When Abraham looked up, he saw a ram caught in the thicket — God had provided Himself a sacrifice just as Abraham told Isaac that He would.

This same thing has happened with you and me. God, through Jesus Christ, has provided Himself with a sacrifice. Make this bold confession about what the Word of God says is true for you. Read Romans 10:9,10 again. Begin to confess your belief in it openly, then act upon it.

Apply God’s Word in every one of your life situations. When you make a bold confession, this will bring God’s intervention in your life.

Confess what God says about you and state it back to Him and to the world. State it openly, even when there is no one listening. In this way, your confession takes the printed Word of God from the pages of the Bible and turns it into a living experience in your life.

Use the bold confession as Abraham did. Trust in the Word of God and look for no additional proof other than that Word. Be strong in faith as Abraham was, and give glory to God. That glory was praise to God, and an open confession of belief in God’s promises. His faith never wavered. He continually acted upon the truth that was in his heart, even to the point of seeming to bring to utter destruction the only son God had given him. He was ready to take that son and sacrifice him on the altar that God had shown him.

You will see this three-part principle of the “Bold Confession” practiced all through the Scripture: (1) Believing in the heart — (2) Confessing with the mouth, and — (3) Acting upon the bold confession of your belief.

Jesus practiced this principle. David did and Paul also.

Throughout your lifetime you are to practice the entire Word of God. Your Heavenly Father wants you to believe and walk in faith as Abraham did. He wants you to have a manifestation of all the power and privileges contained in the term a “son of God” as you make a bold confession of God’s Word in your life.